BEHIND THE EXPERT: Jeff Clarke’s Wings of Wonder

Many of our employees consider their commitment to providing expert engine maintenance services to stem from a deeper passion for the industry. We’re proud to feature stories about our engine experts whose aviation enthusiasm extends far beyond the shop floor.

A prime example of someone with passion for the aviation industry is Dallas Airmotive’s lead technical engineer for the Honeywell GTCP 36 APU series, Jeff Clarke. Jeff has spent over 35 years refining his craft and throughout his career, he’s visited hundreds of hangars worldwide to provide mobile repair and troubleshooting support. His engineering expertise doesn’t stop there though! Recently, Jeff shared more about a project he started off the clock in 2016 called Wings of Wonder. 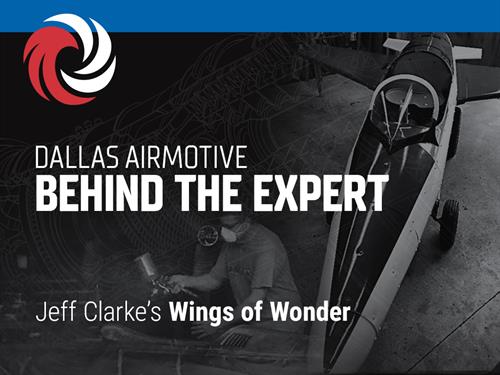 What first began as a small at-home engineering project is now being used to promote interest in aviation in Jeff’s local community.

“It started with me seeing an old 1968 Simplicity Wonderboy riding lawn mower for sale for $15,” Clarke said. “Because it had a joystick, I thought it would be really cool to convert it into an airplane to pull my grandkids around the yard.”

An engineer to the core, Jeff disassembled and inspected every part of the old mower before investing in building his masterpiece. Using raw materials, the “airplane”, a small motorized model that can carry two passengers, was completely handmade and engineered by Clarke.


“As it turned out, there were a few bushings that I had to make for the rear axle and I also replaced the engine, but everything else was in really good shape,” Clarke mentioned.

As the project came to a close in 2019, Jeff decided to also use the plane to inspire others to become more interested in aviation. In 2016, Jeff began posting the progress of his build on Facebook and named it Wings of Wonder.

“As a result, I’ve now been asked to join forces with the Millville Army Airfield Museum and the Jr. Civil Air Patrol. We’ve used the plane to pull a large banner that represents their organizations at various events and parades,” Clarke said.

Where will the Wings of Wonder project fly to next? Jeff says he’s already making plans for 2020 with local aviation groups and hopes to continue sharing his project with the community.

What kind of aviation-related projects might you be working on? Share with us in the comments how you’re passion or interest in aviation maintenance and engineering has fueled your hobbies or career. #PoweredByPride